WHOlanta 2018 took place last weekend at the Atlanta Airport Hilton. This was the first time the convention had been there, and it turned out to be an excellent convention space, with lots of room to gather in the lobby between panels. The crowd took to gathering around the marvelous Tardis replica, which also sometimes played most un-Tardis-like music. There was also a large vending room area, with plenty of space to move around and browse.’

When not hanging out or buying things, con-goers were delighted to get autographs and photos with special guest Louise Jameson, who played Leela, companion to Tom Baker’s Doctor. Ms. Jameson also gave two delightful interviews, one with convention director Alan Siler and one with vivacious singer Cat Smith. She was an utter joy and a lovely lady. 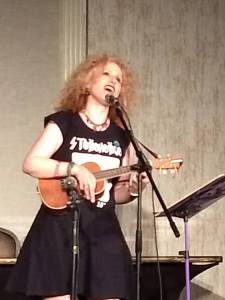 Other entertainment included a cabaret to benefit the non-kill anima; rescue FurKids, and The Masquerade, which allowed attendees to show off their costumes. These were hosted by the magnificent Moxie M. Magness, Chief Cosmetologist on the Starship Enterprise. Moxie is one of the funniest people we have ever met and an integral part of WHOlanta; The climax of the Cabaret this year was when she smashed her ukelele, because “after all, it is a Who convention.” 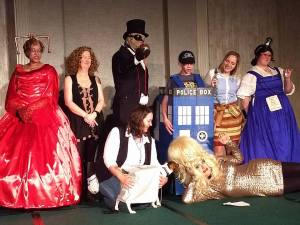 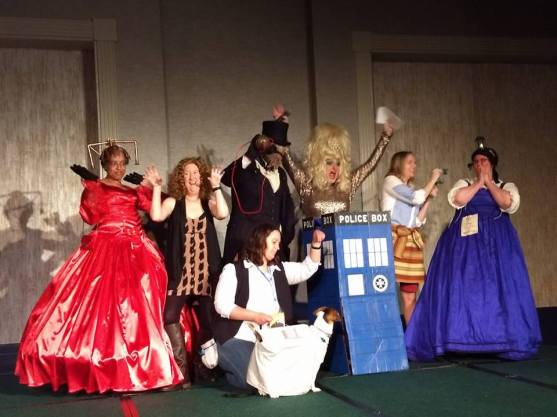 Aside from all of that, there was kids’ programming and gaming, and many panels full of lively discussion about Doctor Who, other science fiction programming, literature and video screening.  In the evening, many adults took advantage of the hotel bars.

It was a blast, a great escape from the everyday world. It will occur at the same time next year, and we plan to be there! How about you?

Below, it’s me as the Girl in the Fireplace and waiting for the Doctor in the incredible props exhibit in the basement. 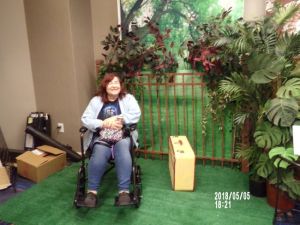